A fast treat that will remind you of grandma’s kitchen! Delicious crunchy crumble topping with a silky fruit and cheesecake middle layer that is guaranteed to satisfy your sweet tooth.

This recipe is a result of a conversation I had with my good friend Andrea. We were talking and she had shared that she wanted something sweet, but at the time had a limited pantry. After spending some time discussing the potential ingredients we came up with a quick crisp recipe that was the perfect choice for a rainy day delight.

Of course, after we hung up the phone I started thinking that I was also craving something that resembled a crisp. So, I began to do my own pantry inventory and these apple-pear cheesecake crisp bars were born! 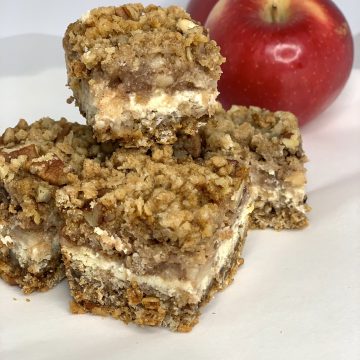