Embrace St. Patrick’s Day with an Irish delight! This is a very easy and quick cupcake recipe that will have everyone dancing a jig. I made these cupcakes after a trip to Ireland and they were gobbled up in record time. Here is the back story.

I had the opportunity to visit Ireland for work and was amazed with the sweets. I had no idea that the food would be so diverse, and definitely didn’t know that the desserts would be so yummy! Based on what I knew of Irish food, I didn’t expect much more than some whiskey, fish and chips, and shepherd’s pie.

Boy, was I surprised! After landing and checking into a quaint little hotel, I was able to walk down to the local farmer’s market in Dun Laoghaire (pronounced “Done-Leery”). There were at least 30 different booths containing coffees, pastries, breads, cheeses, oils, flowers, and much more.

After the shock of all the colors and flavors, I was attracted to this delicate pear pastry. It spoke to me and I knew that I had to taste it!

The pear was ripened to perfection and ever so slightly sweetened. The pastry itself was so light that I could have eaten another 5 of them and not been close to full. As I was enjoying the flavor explosions in my mouth, I came to the realization that Ireland had really amazing sweets!

From there I continued on with my food exploration. Not only were there a ton of desserts to taste, but also some very fresh savory delicacies. My next favorite was the fresh fish. This salmon was one of the best I have ever had. It wasn’t fishy tasting and had a perfect flake. And, the creamed garlic mashed potatoes on the bottom surely didn’t hurt!

However, the most amazing sweet I found was in Dublin. There was a small doughnut shop on the main street that had doughnuts the size of my head. Yes, that is right – they were huge by American standards.

Also, the flavor combinations were out of this world. I selected 3 so that I could taste a variety. It was a bit wasteful as I couldn’t possibly eat them all, but I had to taste them. The overall winner was the Irish cream filled doughnut. (I was surprised, as I thought the straight chocolate would rule.)

After getting back from Ireland, I was laser focused on concocting something that reminded me of the Irish cream doughnut. I ended up with a light yellow cupcake that had a sinful chocolate whiskey center and topped with an Irish cream frosting and green sprinkles. It should be Irish green, right?

I love a from scratch vanilla cupcake as much as anyone, but when tested by friends and family, the cake mix version actually reigned supreme. Don’t let the simple cake fool you! The rich chocolate center packs a punch and the light buttercream frosting will have you singing Oh, Danny Boy in no time at all.

The cupcakes can be stored under a cake dome or in an airtight container for several days, but I haven’t had them last that long before. I hope you enjoy them as much as we have.

If you happen to give them a try, please drop me a note and/or pic and let me know what you think. Enjoy! 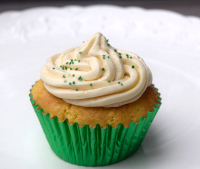 Embrace St. Patrick’s Day with an Irish delight! This is a very easy and quick cupcake recipe that will have everyone dancing a jig. I made these light and fluffy cupcakes after a trip to Ireland and they were gobbled up in record time.
Print Recipe Pin Recipe
Prep Time 30 mins
Cook Time 30 mins
Total Time 1 hr
Course Dessert
Cuisine American